Wow. I don’t even know where to start with this novel. I chose it because it was on Book Riot’s Best Books of 2014 So Far  list, and I typically enjoy the books recommended by Book Riot. Saying that I “enjoyed” this book is almost like saying I “enjoy” coffee in the morning. I absolutely devoured this book. I was wary, because I again found myself with a post-apocalyptic style book and I feel as though I’ve read my fair share of those in the last year or so. But even from the first line, “Malorie stand in the kitchen, thinking,” I knew I was going to finish this book in the span of a day.

Malorie’s world is mostly dark. She and her two young children live in a cheerless house that protects them from the outside world. There is something on the other side of the door that must not be seen. It’s almost a reverse Weeping Angel, instead of “blink and you’re dead,” it’s “open your eyes and you and everyone you love will be in bloody horrifying heaps around the room.” No one knows exactly what it is that causes this mental break, only that the possibility of seeing it has driven some people to the extreme of plucking out their own eyes to protect themselves.

She has trained her children to rely mostly on their ears so they do not have to use their betraying eyes in the outside world. One day, she attempts to escape the house and find a sanctuary where she can provide a better, if not normal life for her and her littles.

What I loved most about this book was that it made the reader rely on their sense of hearing as well. There are such rich descriptions of sounds that I was forced to imagine myself, blindfolded and terrified with nothing to guide me but my aural sense. And unlike other horror books, there are unanswered questions in Bird Box. I was left satisfied but my mind was racing, filling in the details that were (intentionally?) absent. One of the reasons I don’t usually read horror and suspense novels is because I am so often disappointed at the “culprit.” The twist, the villain, the evil presence is something that was either guessed in the fourth chapter, or a twist so ridiculous it leaves me wanting to hurl the book across the room. Horror has a tendency to die with the revelation. As things come in to place, I become more and more distant. I haven’t read a book this fulfilling in a long time, and Josh Malerman has proven himself, in the breadth of 260 pages, to be a master in this genre.

Best line: “Perhaps the mentally ill will inherit this new world, unable to be broken any more than they already are.” 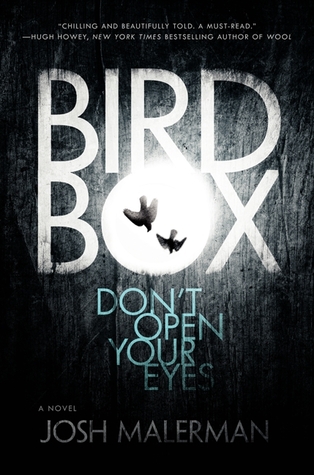