Typically, dystopian fiction doesn’t take me very long to read. Maybe because I’m bored with the genre, and therefore I don’t spend too much time thinking about the story. This book was a little different, but I can’t say what caused the break in protocol for me. The story takes place in a future world where everyone, at the age of 16, receives an operation to make them gorgeous. The theory is there is no longer any inequality when it comes to body image, which makes for a happier, more productive population. Definitely an interesting concept. The citizens are separated based on what stage of life they are in, such as Ugly, Pretty or Crumbly. I have to say, the choice of the word crumbly to mean elder was at once hilarious and irritating. It brought to mind doddering, slipper wearing corpses, which didn’t mesh with the description of those people in the book. There are plenty of suspenseful, action packed scenes, but just as many with the typical teenage angst that so often accompanies this kind of book.

Also, I understand that there really aren’t new thoughts anymore. Everything pulls from something else, and it is a very rare occasion that I read a book, see a movie, or even hear a song that doesn’t make me pause and recall something else that is similar. This story was like reading a transcript of the Twilight Zone’s episode, Number Twelve Looks Just Like You; complete with the sinister twist at the end. I wouldn’t say that I loved this book, but it did pique my interest enough to continue with the rest of the series; though not immediately following this one. 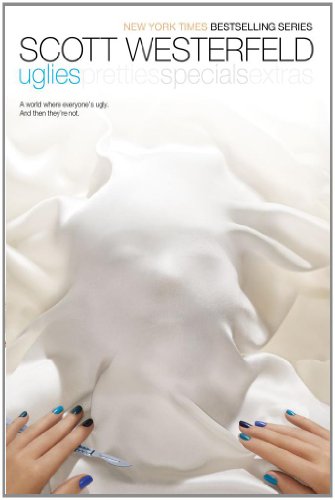